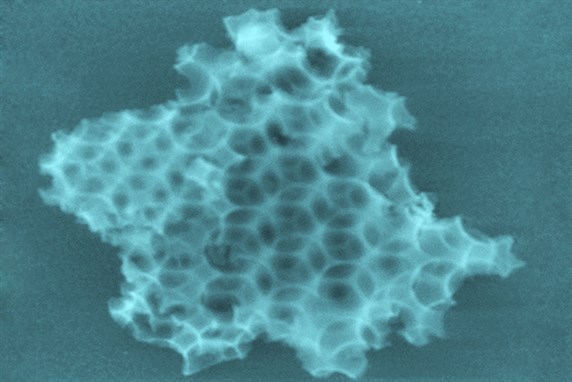 A team of Aston scientists have discovered a new strategy to fabricate ‘self-assembled’ catalytic materials which could have revolutionary applications in chemistry, energy and healthcare.

In collaboration with Universities of Durham and Leeds, the Aston team designed a novel ‘bottom-up’ scalable process, using low cost chemical ingredients, to create three dimensional porous architectures from silica – with a complexity rivalling that found in Nature.

Professor Adam Lee, lead author of the work which was published this week (16 November) as a Letter in Nature Materials, one of the world’s leading scientific journals, explained that the new method could be readily adapted to transform current catalyst manufacturing.

Catalysts are substances which accelerate chemical reactions, and are able to steer atoms and molecules down specific pathways in order to form desirable products. Catalysis is a core area of science and technology, and the industrial catalysis sector contributes over £50 billion annually to the UK economy, impacting on almost every aspect of daily life, from the production of fuels to plastics, paints and drug therapies.

In many commercial processes, low value chemical building blocks are transformed into high value products, such as pharmaceuticals, through a series of catalytic reactions, termed a cascade. Each reaction is normally performed independently, making it difficult to control the reaction sequence and also increasing the economic and labour costs, and the amount of waste generated, to produce the desired chemical product.

In their Letter, the Aston team demonstrate the ability to control the location of metal nanoparticles within these three dimensional architectures with atomic scale precision. Such control is essential to facilitate energy efficient chemical reactions of relevance to climate change, energy security and sustainability, and also opens up new possibilities for the design of next-generation biomedical sensors and telecommunications devices. For example, by placing two catalytic metals, palladium and platinum, in different locations within their silica architecture, less of these expensive precious metals is required to convert naturally occurring unsaturated alcohols into valuable fragrance and flavouring components. This new bimetallic catalyst operates under mild conditions, reducing CO2 emissions and minimising the use of hazardous reagents.

Professor Lee, Chair of Sustainable Chemistry at the European Bioenergy Research Institute (EBRI), said: “We hope that this research will a broad and lasting impact upon the way that porous materials are synthesised and applied across diverse industries. In particular, our new strategy could revolutionise the way in which heterogeneous catalysts, such as those found in the modern automotive catalytic converter, are designed, offering enormous potential benefits in terms of chemical manufacturing costs and environmental and health applications.”

In October 2013, a brand new European Bioenergy Research Institute facility was opened on the Aston University campus, uniting catalytic scientists, chemical and mechanical engineers and techno-economic experts. This £16.5m building, jointly funded by Aston University and the European Regional Development Fund (ERDF), contains seven analytical and industrial laboratories, meeting spaces and a demonstration power plant using technology developed by EBRI researchers. The power plant can provide the heat, electricity and cooling needs of the building and also part of the University’s campus. It is the first demonstration plant of its kind in the UK.