Compost is produced when microorganisms like bacteria break down a feedstock, such as food or garden waste, into simple compounds which can improve soil fertility

Cold composting
Traditional ‘cold composting’ is cheap and easy to manage, but is a very slow process, especially when the temperatures drop in winter.

Hot composting
‘Hot composting’ is a more effective method, but while there are some commercially available hot composters, these are typically much smaller and do not recycle the excess heat for other applications. Warm Earth are a Charitable Community Benefit Society who produce and sell their own plants and compost. They wanted to improve their compost production process with an innovative new hot composter, which they could also sell commercially. Small hot composters are readily available, but only up to around 600L, and the only composters that recycle the excess heat are large industrial plants, which are very expensive and infeasible in most cases. Warm Earth saw an opportunity to produce a medium-scale hot composting system that can be sold commercially, and also makes efficient use of the extra heat. Company background
Warm Earth Well-Being was founded by Ernie Holmes and Chris Vaughan as a community project in West Birmingham. Nestled behind a derelict church hall, Warm Earth brought together a very diverse neighbourhood. As the community grew they moved into a site at Birmingham City Hospital, where three greenhouses had just been refurbished.

After settling into their new home, Warm Earth began looking for new streams of revenue to continue their community work. They started selling organic plants and flowers, as well as compost which they made themselves in two large cold composters. As they continued to make batch after batch of compost in the traditional way, they began to wonder if the excess heat from the composters could be put to better use.

Support from EBRI
Help to identify new market opportunities
Ernie and Chris approached the Energy & Bioproducts Research Institute (EBRI) at Aston University with the idea for an innovative hot composter that efficiently recycles heat like a large industrial composter, and is larger than current commercial hot composters. EBRI’s world-leading team of scientists and business advisors began a consultation report into the problem, investigating the current market for hot composters, and the central question of how advanced heat recycling technology from large plants could be scaled down.

As a small group of volunteers, Warm Earth do not have the technical expertise to operate a complex system. Since they also plan to sell the composters commercially, the final design needs to be effective and very straightforward to use. In addition to their design recommendations, EBRI designed a comprehensive prototyping strategy for the composter. The new solar-powered system automatically controls the conditions in the container based on feedback from a network of sensors. Warm Earth can use this to test the effectiveness of different designs, as well as different feedstocks.

Following EBRI’s investigation, Warm Earth will be able to optimise their design for non-expert users, without compromising on performance. This will mean they can market their product to a wide audience, including garden centres, allotment sites and anyone with a large garden, and also to schools for use as a learning tool.

(Pictured left and above: prototype hot composters in development at Warm Earth.) 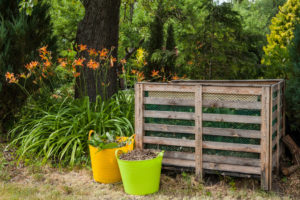 Findings and recommendations
The microorganisms that break down feedstock into compost work more effectively at higher temperatures. By containing the heat they produce as a byproduct of that reaction, insulated hot composters let the internal temperature rise to the optimal temperature of around 40ºC. However, if the composter does not let some of that heat escape, the temperature can rise above 60°C and kill the bacteria and fungi.

There are a number of solutions to ‘aerate’ the compost and keep it at the ideal temperature. The most straightforward is ‘passive aeration’, where small holes are made in the container to let the hot air escape. While this is cheap and easy, it does not allow precise temperature control. The alternative is ‘forced aeration’, where new air is introduced from outside to cool the container. ‘Positive aeration’ pipes air into the bottom of the container and up through the feedstock, and the hot air escapes through the top, while ‘negative aeration’ sucks air in from the top, down the container, and out at the bottom. In a negative system, the air is easy to contain and pipe off for use as a heat source. In Warm Earth’s case, this could mean heating their flower and vegetable beds to extend the growing season throughout the winter.

EBRI suggested developing a simple negative aeration system, which could also double as a manual mixer. This would let Warm Earth pipe off the hot air for other applications while maintaining a very user-friendly design that does not require expert knowledge.

“EBRI have helped us clearly identify a commercial direction for our business. Having EBRI experts dedicated to our project is a godsend: they spoke in plain English and walked us through the whole process.” 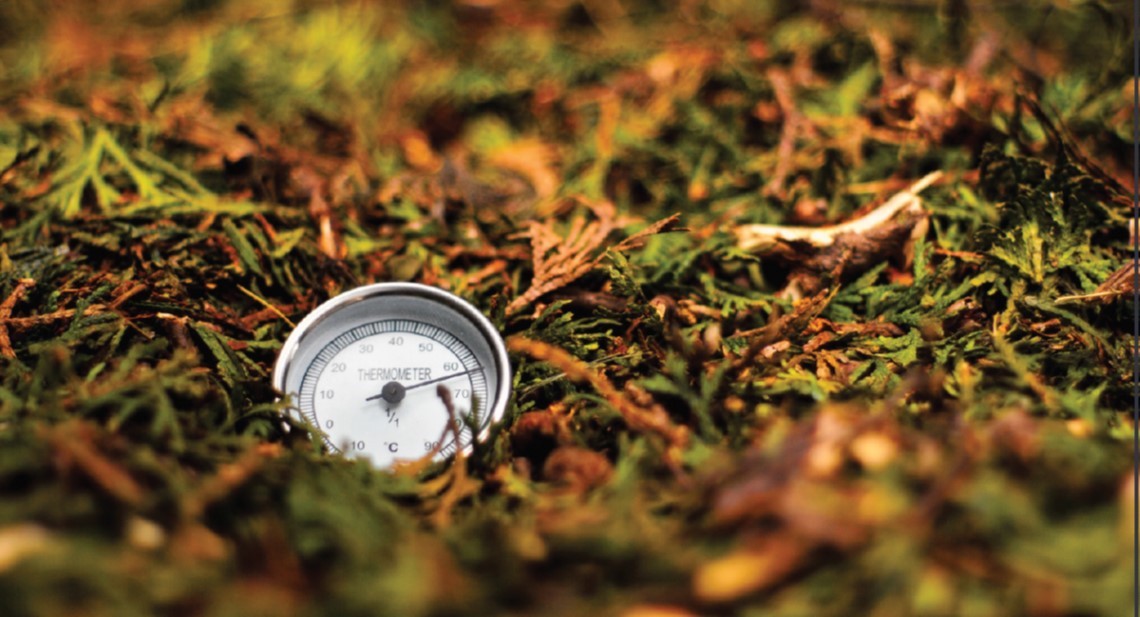 In addition to the technical consultation, EBRI have provided Warm Earth with a computerised testing protocol to experiment with different designs. By adding a range of thermometers and
other sensors to the prototype, the new system will give Ernie and Chris the right technical platform to explore the various design options proposed in the consultation.

The sensor system will also double for testing the various feedstocks. Warm Earth get theirs from a range of sources, including brewery waste, coffee, and even the soil from police drug raids. With EBRI’s help, they can explore which feedstocks, and in which combinations, produce the best compost in the least time.

As Warm Earth also want to sell their new composter commercially, EBRI’s testing system will also enable them to measure the performance of their product. This will give them an effective
marketing strategy and further business opportunities, with better security for their charitable community work.

“It’s been very reassuring to know that we aren’t doing this alone. Having a group of EBRI experts with a deep technical understanding has transformed the project and been an enriching experience.”